Operated by The Avon Historical Society 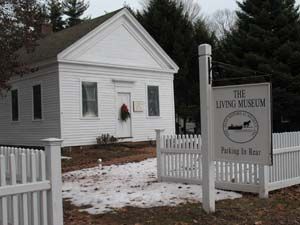 School House #3, formerly the Living Museum, 8 East Main Street (Route 44).   Built in 1845 as Schoolhouse No. 3 in West Avon, it remained a school until 1949. It was moved to its current location in 1982 to make room for the new Avon Free Public Library on Country Club Road.  It has on display a diorama and other information about the Farmington Canal, which operated from 1828-1849 and crossed the Albany Turnpike (now Route 44) running north and south on this exact spot.  A plaque explaining the Canal crossing is next to the building.  It is now the headquarters of the Avon Historical Society and provides storage and staging for exhibits and other displays used in the community.

Open by appointment only. 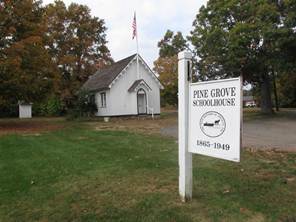 1865 Pine Grove Schoolhouse, located at the intersection of Harris Road and West Avon Road (Route 167). Open Sundays 2:00 – 4:00 p.m. June through September or by appointment.  Constructed at a cost of $1,538.34, the school opened in December 1865. Miss Francis, its first teacher, received $96.00 for a four month winter term. English, grammar, mathematics, geography, history, music, and art were the subjects studied. The pupils walked to school carrying books, slates, and tin dinner pails. They took turns building a fire in a bench-type stove. Girls sat on the left and boys on the right. Eight grades were taught here.  For 62 years the school was known as School Number 7. In 1927 the town officially named it the “Pine Grove School.” It closed as a school in 1949, but remained open as a branch library, a nursery school, and a meeting place for Explorer Scouts. Today it is set up as an early 20th century schoolhouse complete with bolted desks (c. 1865), hand slates (c.1900), textbooks (c. 1925), and a potbelly stove.  It is on the National Register of Historic Places. 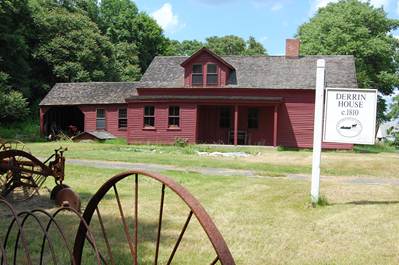 c. 1810 Derrin Farmhouse, 249 West Avon Road (Route 167) is operated by the Avon Historical Society under a lease agreement with the State of Connecticut Military Department, owners of the building for the First Company Governor’s Horse Guards located across the street.  The home is situated in Horse Guard State Park Scenic Reserve; a 100 acre space owned by the CT Department of Energy & Environmental Protection (DEEP), West Avon Road.  The Society interprets the Derrin House as a 19th century rural farmhouse of the Ammi Derrin family who raised 6 children and lived here from 1850s through 1880s. Open Sundays, June-September, 2:00-4:00 pm or by appointment.  It is on the State Register of Historic Places. 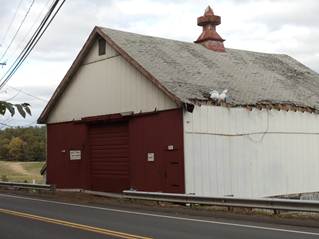 c. 1880 House Guards Barn, 232 West Avon Road (Route 167) is leased by the Avon Historical Society under an agreement with the State of Connecticut Military Department.   Currently under major renovation, the Society has received private donations, as well as State grants, to re-stabilize the structure for adaptive reuse.  Constructed as a New England Bank barn around 1880, its timber frame construction was made according to the “square” rule using a circular saw. It was used as an animal barn until 1954 when the Horse Guard took it over.  It leased it to the Society in 2011. It is not open to the public, except by appointment.  It is on the State Register of Historic Places.

Marian Hunter History Room.  Avon Free Public Library, 281 Country Club Road, Avon, CT 06001. Located on the first floor of the Avon Library, the Local History Room is named for Marion M. Hunter, long-time librarian and historian of Avon.  The collection was formed when the Library and the Avon Historical Society combined their archives and dedicated the room on February 4, 1989.  It includes photographs, postcards, scrapbooks, maps, deeds, and other pieces of memorabilia.  Researchers and interested residents may find information on the general history of the town, original old homes and buildings in Avon, and genealogies of original families.  Staffed by volunteers from the Historical Society, it is open 14 hours per week or by appointment.  An exhibit case and areas outside the Local History Room have changing displays on local or state history.  Call 860-673-9712 or email us (avonref@avonctlibrary.info) for more information.  Handicapped accessible.